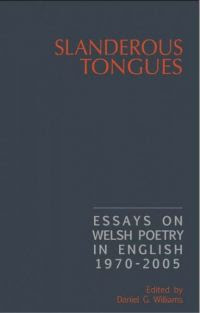 Contributors to Slanderous Tongues “address what seemed to them the most interesting themes, debates and modes of expression in contemporary Welsh poetry …,” as editor Daniel Williams puts it in his introduction. While the time is right for criticism that considers postmodern Wales and challenges simplistic formulations of identity, nation, and belonging – my reaction to the collection was mixed.
Slanderous Tongues starts off well with Matthew Jarvis’s survey of “Poetry after the Second Flowering,” tracing the development of identity politics and national feeling in Anglophone Welsh poetry since the 1960s. Later essays by Jo Furber (“Gender and Nationhood”) and Hywel Dix (“Class and Poetry in Wales”) address their specific issues thoughtfully....
Read the Full Review on the CREW website
Posted by Daniel Williams at 12:42

Several of the criticisms in this review are pertinent and well made, but I think the suggestion that the essays by myself and Jasmine Donahaye are characterised by a ‘resistance to allowing poets to explore cultural material of his or her choosing’ is quite wrong. It’s not what has been selected for exploration that’s the problem, but the way in which that material is treated. David Lloyd’s review gives the impression that I pay no attention to the African American voices in Dressel’s poem. I actually discuss them at some length (175 – 177). If Dressel accepts that the war was ultimately about slavery, he also believes that it was ‘about the need to defend your land against invasion’, about ‘the opposition of essentially agrarian values to those of an industrial society’ and about ‘white Southern dignity’. He ends the poem by asking Wales to ‘consider Dixie’, and asks us to ‘Leave / the slaves for now’. I state explicitly in my chapter that Dressel is no white supremacist (p.175) and that his major achievement is to create a multi-voiced poem that challenges unitary accounts of the Civil War (173). But I also argue that there are times – such as the examples quoted above - where he is “in danger of reinforcing … the ‘white supremacist’ reading of the Civil War”. I’d stand by that, and would reiterate Ishmael Reed’s response to those who, like Dressel, believe that Confederate monuments represent a heritage: ‘A heritage of whipping people’.

Seren’s Slanderous Tongues, a volume of essays edited by Daniel Williams, covers the past 35 years of our literary longings.

Nicholas Jones discusses Harri Webb and the place of literary nationalism. Hywel Dix ponders on the place of class. In the middle of all this, Nerys Williams looks at how the avant-garde has been managed in Wales.

She concentrates largely on my own work. And, I have to say, largely gets it right.