On the fifth anniversary of the earthquake and tsunami that hit Japan, killing 16,000 people and causing the Fukushima reactor meltdowns, an international one-day symposium on ‘New Directions in Raymond Williams Studies’ took place in Williams’ birthplace of Pandy, Monmouthshire. Two seemingly unconnected events, but by the end of the conference, in the moving summing up by Shintaro Kono, a thread linking the two had been established.

The first panel - ‘Culture and Materialism’ - featured papers from Ryota Nishi (Chuo University), Alice Barnaby (Swansea University) and Masashi Hoshino (Manchester University). Beginning with an examination of Raymond Williams’ encounters with eco-criticism, Ryota Nishi introduced the notion of ‘red and green working together’ which came to encapsulate the political direction Williams himself both had taken in association with both Plaid Cymru and Labour, and his move toward a greener socialist politics at the end of his life. Alice Barnaby injected a note of controversy with her presentation on the ‘Problems of new materialism’, offering a compelling overview of ‘Thing Theory’. This connected well with Ryota Nishi’s earlier link between colonisation and the nature of the Fukushima disaster. If the object has agency, it can also have power. Williams’ anticipation of some aspects of new materialism was placed against this idea of ‘thing power’ and the question it poses- ‘does it turn too far from the human subject?’. A meaty theoretical sandwich was completed by a presentation from Masashi Hoshino on Ernst Bloch and Raymond Williams. The ‘sense and the impulse’ of the long revolution was the connecting factor between Williams and Bloch’s ‘unmastered now’.  The idea that ‘the old is pregnant in its forces of production’ linked in with Williams’ belief in the fundamental power and importance of experience, both as a resource of hope and as a way of understanding in itself. 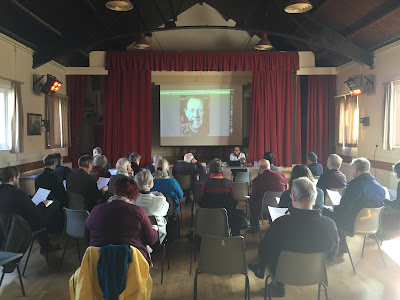 It is worth mentioning the coffee break for the great spilling out into the early spring sunshine, where tea and biscuits were enjoyed in the shadow of the Skirrid, outside the village hall in Pandy. For a conference celebrating a figure so aware of place, it was entirely fitting that we did not remain sequestered and separate from it but escaped into it at every opportunity. 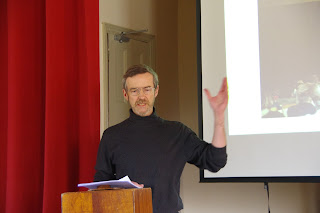 Following the break Tony Pinkney (Lancaster University) spoke on the subject of Raymond Williamsas Oxford Thinker. Williams is most often connected with Cambridge, yet many formative parts of his life took place in Oxford, and the city itself provided the physical setting for his novel Second Generation. Pinkney opened by describing how Oxford had woven itself into his memories of Williams. It was at Oxford that Williams first memorial event took place, 16 days after his death. His son’s first outing was at a lecture where ‘I lifted up my 6 week old [son] and said ‘you’ve got to see Raymond Williams’. Oxford is where Williams built the reputation that takes him back to Cambridge. It is where he writes Culture and Society- and Pinkney argues it is the experience of being in Oxford at that time, the academic connections and ‘distinctively Oxfordian moment’ in Williams development, the influence of Matthew Arnold and William Morris as much as F R Leavis, that results in this work. Williams is an Oxford Thinker, academically and in his considerations of Oxford itself. Oxford gave Williams the resources to become fully himself, and the Oxford story needs retelling to rebalance this.

Following lunch, and another spilling out into the sunshine, the afternoon session took place with a focus on Aesthetics, Art and Literature. Fuhito Endo (Seikei University, Tokyo), Takashi Onuki (Swansea University), Cath Beard (Swansea University), and Peter Wakelin considered Marxism, translation, critical receptions, and aesthetic interpretations of Williams and Wales. Fuhito Endo placed Williams alongside Jameson and Felman in an analysis of the institutionalism of new historicism in the early 1980’s. Takashi Onuki gave a fascinating insight into the issues thrown up during translation in his paper on translating People of the Black Mountains. The intricacies of language and translation as an act of revealing valuation gave a fascinating insight into the politics of the act of reading. Cath Beard examined how critical responses to the 1985 publication of Loyalties betrayed an anti-Welshness at the heart of anglocentric criticism, but also helped to magnify the value of considered examination in the works by Bruce Robbins and Tony Pinkney. Set against each other it was clear the fiction of Williams had been unfairly treated as the poor relation by many who cast a critical eye over his body of work, and was worthy of re-evaluation. The session drew to a close with Peter Wakelin’s moving presentation of ‘Border Country in paint: Raymond Williams artist contemporaries’. This collection brought much of what had been discussed during the day into visual representation and was a fitting end of the panels.

‘The sense and the impulse’ - at first glance the papers making up the body of the international symposium ‘Beyond the Border Country- New Directions in Raymond Williams studies’ may have seemed only vaguely related. Yet a fascinating thread ran through and within each presentation, building into a wider feeling. Agency, ecology, the body, the indiscriminate anger of the elements, the connection with the earth, Williams’ ‘locatedness’ (from Wales to Oxford) and the power of the image combined to provide a structure of feeling culminating in a moving summing up by Shintaro Kono. Shintaro described the impact of being in Tokyo on the day of the earthquake and tsunami, and the fear of radiation from Fukushima. The coming together of ‘red and green’ and the new direction toward ecologically aware politics that Williams was taking is needed now, more than ever. Hugely diverse papers came together within this context to make the Yeats quote paraphrased by Tony Pinkney ‘Our best labourer dead, and all the sheaves still to bind’ the end result of the day. The new academic and critical labourers are set to tying the sheaves left behind, especially those languishing in the field of ecocriticism, the direction perhaps in which Williams was moving towards the end of his life.

Following the conference, delegates headed to The Art Shop and Chapel, Abergavenny, for the launch of Peter Lord’s ‘The Tradition: A new History of Welsh Art’. Part of the Parthian tour to celebrate the book, we enjoyed a 30 minute talk from Peter Lord, along with tea and cake. In the best tradition of Williams’s scholarship, Lord deconstructed the ‘selective traditions’ of the past that rendered a Welsh artistic tradition invisible. But his is no mere act of deconstruction, for his work and career has been dedicated to the construction of a Welsh artistic ‘Tradition’. The fruit of that work is distilled in his new, lavishly illustrated, volume. It is a fabulous book that all reading this should head out and buy immediately. 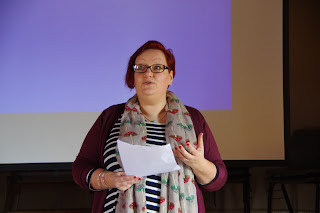 The Conference was supported by:
Richard Burton Centre for the Study of Wales
CREW  - Canolfan Ymchwil i Lên ac Iaith Saesneg Cymru / Centre for Research into the Literature and Language of Wales
Raymond Williams Kenkyukai with the support of JSPS/MEXT Grant-in-Aid for Scientific Research
Parthian Books
Eisteddfod Genedlaethol Sir Fynwy a’r Cyffiniau
With special thanks to Stuart Neale of Pandy Village Hall