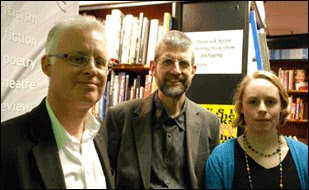 CREW's John Goodby has won first prize in the inaugural New Welsh Review/ Aberystwyth University Poetry Prize competition 2009. Author and judge, Philip Gross presented John Goodby with the £200 prize for his poem '21st October 1966' at the Aberystwyth Arts Centre Bookshop on 12th March. John Goodby's poem focuses on 21st October 1966, the day of the Aberfan disaster, when 144 people, 116 of them children were killed when a tip of coal waste slid onto the village of Aberfan in South Wales.
John said: ""The poem began as a look at the search for links between Birmingham, where I was born and grew up, and Wales, where I've lived for the past fifteen years. I wanted to challenge the obsession many poets have with parading roots and belonging: asserting an identity intensely is too often seen as guaranteeing a good poem, when usually it means the opposite. I began with 'Birmingham Welsh' (along the lines of 'London Welsh') as a mild subversion of that obsession, and of the notion that often accompanies it, namely that if you derive from a place like Birmingham, with an unglamorous accent rather than its own language, and a history of moderate prosperity rather than of deprivation and oppression, your identity isn't worth as much (and so, according to the logic of essentialism, you can't write poetry either). For me, all places of origin are equally valid, though not validating, as subjects for poetry. But although the links the speaker offers are a kind of clutching at straws, constructed and inauthentic, he finds that they begin to coalesce around the black hole of memories of the Aberfan disaster. The poem's syntax starts to become unstable and fluid, like the frightful tip itself. The earlier attempt to force links now becomes its opposite, a teary fusion in which the excess is a kind of elegiac tribute. Nor can the speaker tell if this is a true memory or not: is he remembering the events because he wants to will the link; is his memory real, but a response learned from his teachers; is it genuine? I don't know if it's possible to decide, but I hope the ambiguities enlarge the reader's sense of the subject by suggesting that the acts of mourning and commemoration are often made both for selfish and generous reasons, at one and the same time, and by exploring what happens to language when we attempt to imagine the unimaginable or represent the unrepresentable."

They followed their stolen water for miles, the Birmingham
Welsh. Why not? It swelled Rough Road’s green, square hill
to which it flowed 86 miles without being pumped,
through tunnels and pipes from the mountains of mid-Wales
the plaque said, and so should flow from their taps too, from Huw’s
and Glyn’s in Endhill, whose Dad carved lovespoons for hiraeth,
as from our own. And it is a little Wales I increasingly
gaze down on through the years’ glassed depths, the pain-
ful, jewelled beauty of a carboy garden, chalk-dust on desks,
endlessly repeated ms, beans in moist jam-jars, their horrid
roots preternaturally distinct, as if engraved. I over-
look it all, now, the crown of Bandywood Crescent—beeches,
wheeling rooks, a vertigo of clouds—and Kingsland Road
School, clear as some immaculately submerged valley, as their
escape by the book from mine and furnace to the fervour
impressed on our soft inland minds is clear now, cast into relief
by exile. Mrs Scott, thick-lipped, throaty, fierce, invokes
her father’s hen-coops above Merthyr; Mr Thomas grins
slowly, childless, his limp glib falling yet again, his plimsol
for what we called a pump half-heartedly falling, unlike
dark-jowled, beastly Mr Williams’s expert welting
action; his beer-and-Woodbines breath a bardic tenor
hoarse over stud-stamped wastes. Is that his string vest, or
an elaborate, blurring retrospect? And how, so far away, to see
the hymn-book bound in green anyway, a green hill
so far away it is black, under which three boys sat on the play-
ground wall, it was recalled, before the tremor minutes
after morning prayers; as we were opening desks and books
as well, monitors still at tasks then, milk from the gate trembling
in steel crates to classes ignorant of the pulsing well-
spring of the tip, our big clock, too, twitching to nine-
seventeen, hands telling of the gravity of time, of a hill water
moves as water moves to a hill, unbearable as love, as reservoirs
filled like our heads with hurt bent in dark rows next day, salt
tears we shed learnt from them also, or do I imagine all of this?
Posted by Daniel Williams at 10:12 No comments:

Portraits and Stories from Multi-Ethnic Wales 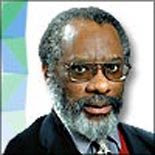 On Wednesday 18th March, at 4.15 pm in Keir Hardie 152, Glenn Jordan will present a CREW Research Seminar on “Mothers and Daughters: Portraits and Stories from Multi-Ethnic Wales”.

Glenn Jordan is Reader in the Cultural Studies in the Cardiff Centre for Creative and Cultural Industries; and Founding Director of Butetown History & Arts Centre (BHAC), a community archive, gallery and educational centre in Cardiff docklands. He teaches cultural theory, cultural policy and photography. Born in Sacramento, California, he was educated at Stanford University and the University of Illinois. Prior to coming to Cardiff in 1987, he was Assistant Director of the Afro-American Studies and Research Program at the University of Illinois. He is currently working on Race (Routledge), Birth of the Black Subject (Blackwell) and a textbook entitled Our World War Two: A Multi-ethnic Community Remembers (BHAC). In 2007 he delivered a memorable keynote address on the African American sociologist and anthropologist St. Clair Drake at the CREW conference 'Transatlantic Exchange'
Posted by Daniel Williams at 12:04 No comments: