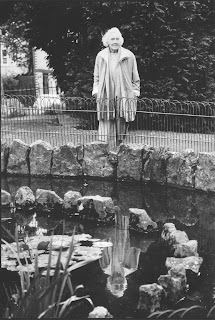 The Welsh poet Heather Dohollau died on April 30th, 2013 in Saint-Brieuc, Brittany, where she had lived since 1959. Arguably a missing chapter in the history of recent Welsh literature, Heather Dohollau remains little-known in the UK because she lived all her adult life in Brittany, and is only published in French at present.


Heather Dohollau was born in 1925 in the Rhondda Valley and raised in Penarth. She left for France after losing her mother as a young woman after the war, and after some years in Paris and London, settled on the small Breton island of Bréhat. There she led an insular, then semi-insular life for almost twenty years, raising seven children in precarious circumstances and running an artshop. For the following twenty years, she worked as a librarian in Saint-Brieuc and became increasingly involved in a literary environment. A close friend of Pierre-Jean Jouve in the mid-1960s until his death in 1976, she developed other literary friendships from the 1980s, when her annual attendance at the colloquiums of Cerisy-la-Salle began. Yves Bonnefoy, Jacques Derrida, Salah Stétié and Lorand Gaspar, who handed her the Légion d’honneur in 2000, have been among her friends and correspondents. An international colloquium held in Cerisy in 2005 and its proceedings have further established the significance of her work, as have other publications.

Most of Dohollau’s published writing takes the form of poems (including prose-poems). These are printed in the following collections, published by Éditions Folle Avoine  (my translations):


She has also published one novel, La Réponse / The Answer (1982), which is inspired by the philosopher Jules Lequier, and one volume of literary essays, Les Cinq jardins et autres textes / The Five Gardens and Other Texts (1996). The latter focuses chiefly on Rilke’s novel The Notebooks of Malte Laurids Brigge. Several of the volumes are illustrated by frontispieces by Heather Dohollau’s son Tanguy Dohollau.

Heather Dohollau’s poems are powerfully evocative of the significant places in her life, always making allowances for the essentially temporal nature of our encounters with place. An exile who only rarely returned to her lost origins (Wales, Bréhat which was a new origin to her), she perceived that the real talisman, what enfolds us back 'home', is transience itself: changing light and colours, what was only ever seen with the corner of one's eye, the awareness that each return is also a chance of leaving the place 'intact' - only then are its gifts truly received. This is also how she looked at paintings (never trying to describe or map out, but all the more vivid in its translation of visuality) and at the space of the poem itself: a slow, open form, returning, like a wave. Her way of remembering, like her way of returning, was intensely visual, intensely seeking the gifts of transience - with all the complex layering of a consciousness in constant dialogue with literature, philosophy, the visual arts, and of course with another language. 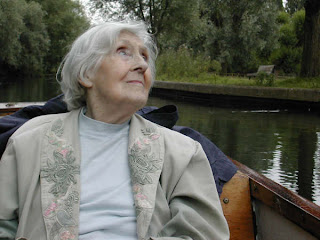 Alongside Heather Dohollau’s writings, we are lucky to have recordings of three poems self-translated into English to remember her by. Additionally, the filmed self-portrait La Promesse des mots / The Promise of Words, by Rolland Savidan and Florence Mahé (Plérin: RS Productions, 2005) gives us a chance to encounter the poet as she retraces her steps to her lost origins (South Wales and Bréhat) and reflects on her past, on returning, loss, ageing, reading and writing, looking at paintings.

Heather Dohollau never spoke Welsh, though it was spoken in her family. Yet Welsh names and places have had an enduring hold over her imagination: they are present in all but one of her twelve collections. Her take on the notions of identity, place, origin, memory, belonging and mother tongue brings fresh and sometimes radical light on problematics that are central to twentieth-century Welsh literary history. She felt close to David Jones’work, partly because his was a Welsh, but outward-looking vision. Her Welsh past may well have played another significant role: it is likely that growing up in the broader context of Welsh-English bilingualism (and perhaps also, to a lesser extent, being aware of Breton-French bilingualism later in life) fed into the double consciousness she writes about compellingly as a writer in English and French. As with Beckett or André du Bouchet, this double consciousness made writing the site of a densely philosophical quest for the Other of language, or as she names it in a poem from her last published collection (p. 101, my translation),

The other poetry that which is not written but which writing projects. The transparent grass sown in ink