The CREW conference on Raymond Williams's Culture and Society@50 took place on November 7th at the Dylan Thomas Centre, Swansea, and was a resounding success.

The day opened with Professor Stefan Collini’s probing and questioning analysis of the assumptions informing Raymond Williams’s view that the term culture emerged as a result of industrialisation. While recognising the widespread influence of the tradition of thinkers mapped out by Williams in Culture and Society, Collini suggested that the historical argument informing the book was inaccurate and has left a misleading legacy. Professor Catherine Belsey, followed by exploring the uses made in contemporary criticism of Williams’s redefinition of ‘culture’ as a process of creating meanings, and as the site of contested meanings. 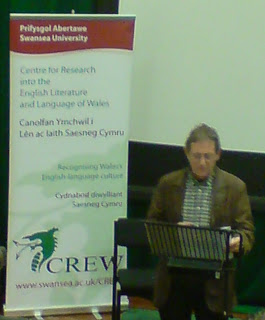 Developing some of the ideas explored in his celebrated biography of Williams, A Warrior’s Tale, and drawing on Williams’s literary analyses of Welsh novels, Professor Dai Smith argued for the particular exceptionalism of the south Wales context of Williams’s upbringing. Anthony Barnett described the 1970s context of his celebrated defence of Williams against Terry Eagleton’s attack on Raymond's ‘gradualism’ and ‘humanism’ in the pages of the New Left Review. The remarkable volume of interviews Politics and Letters resulted from this debate, and Barnett discussed the making of that book and the legacy of Williams’s commitment to pluralism for contemporary politics in Britain. The day ended with the film director Colin Thomas discussing his award winning documentary on Raymond Williams, Border Crossing , followed by a showing of the film. The conference as a whole resulted in an illuminating, multi dimensional, appreciative but at times critical, engagement with Williams’s seminal volume and its legacy. Among those present were representatives of the Raymond Williams Society, The Raymond Williams Foundation, Director of the Institute for Welsh Affairs, John Osmond, theatre and opera director Ceri Sherlock, Ross Leadbeater of Only Men Aloud, poet Letitia Rees, and most importantly many recent and current CREW postgraduate students. Several delegates drew appreciative attention to the ample time given for discussion (a change from the rushed nature of many conferences) and while culture may be ordinary, the food at the Dylan Thomas Centre was exceptional.
Posted by Daniel Williams at 16:40 No comments: