The first of this term’s CREW research seminars takes place on Wednesday, January 27th at 4pm in Kier Hardie Room 216.

Sarah Morse
"But Aberfan Was Different": Reading Ron Berry's Flame and Slag as a a reaction to the Aberfan disaster'.
Posted by Daniel Williams at 14:01 No comments:

CREW is delighted to be able to report that the University of Swansea has confirmed the attachment of Patrick McGuinness to the Centre as Honorary Professor.

Patrick is Professor of French at Oxford (St Ann’s College), and is an internationally renowned specialist in French modernist culture and literature, as well as in the poetry of the French Symbolists. However, he also has a deep and longstanding personal interest in the English-language literature of Wales, and has recently established a reputation as one of the leading scholars of the poetry of the remarkable Welsh Argentinean late modernist writer Lynette Roberts. Patrick has edited both her poetry and her journals, and recently co-organized (with CREW) a highly successful conference at the Dylan Thomas Centre, Swansea, to celebrate the centenary of her birth.

Patrick is also an award-winning poet, whose first collection was nominated in Wales for the Roland Mathias Prize.

He has enjoyed a very fruitful informal working relationship with CREW over the past few years. The new formal relationship enabled by his appointment as Honorary Professor should allow Patrick’s valuable collaboration with CREW to develop in very interesting and rewarding ways.
Posted by Daniel Williams at 13:54 No comments: 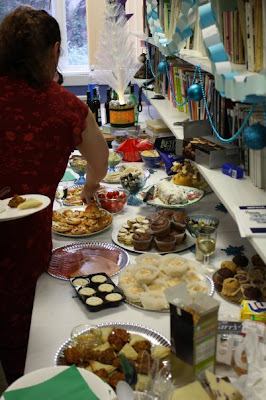 To celebrate the end of term - and Christmas - the CREW postgraduates decided to have a refined office party. The catering skills of the students were exploited to provide enough food to keep us happy for a few days (dipslacement activity is a wonderful thing) and the wine, quotation board, Spotify, Gareth and Daniel kept us entertained. 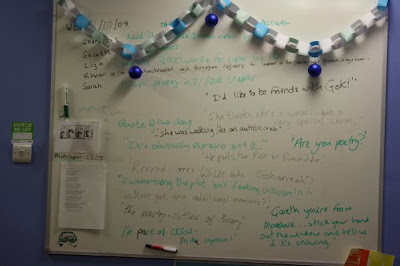 The board offered a pin-the-tale-on -the-donkey style game as people tried to identify the origins of the quotations, and some of the guests uncannily managed to guess their own, obtuse, utterances.
We also managed to set up a live-satellite link to Cimla,to talk to Rhian who was confined with Swine Flu, who enlightened us with her usual brilliant observations.
Needless to say, it was the 4 occupants of the CREW postgrad office who were the last to leave that evening.
[More pictures to follow]
Posted by sarah at 09:53 No comments: