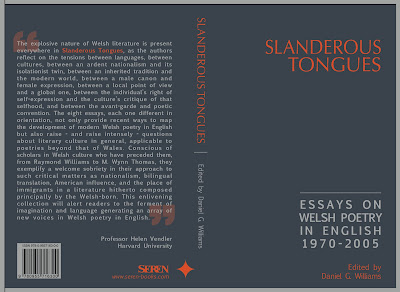 “It’s been a long time coming / But Slanderous Tongues is gonna come” this Friday at the Association of Welsh Writing in English Conference in Gregynog. Aretha Franklin could have had this volume in mind when she sang:

Professor Helen Vendler of Harvard University had this to say about the volume in her report for Seren press:

“The explosive nature of Welsh literature is present everywhere in Slanderous Tongues, as the authors reflect on the tensions between languages, between cultures, between an ardent nationalism and its isolationist twin, between an inherited tradition and the modern world, between a male canon and female expression, between a local point of view and a global one, between the individual’s right of self-expression and the culture’s critique of that selfhood, and between the avant-garde and poetic convention. The eight essays, each one different in orientation, not only provide recent ways to map the development of modern Welsh poetry in English but also raise - and raise intensely - questions about literary culture in general, applicable to poetries beyond that of Wales. Conscious of scholars in Welsh culture who have preceded them, from Raymond Williams to M. Wynn Thomas, they exemplify a welcome sobriety in their approach to such critical matters as nationalism, bilingual translation, American influence, and the place of immigrants in a literature hitherto composed principally by the Welsh-born. This enlivening collection will alert readers to the ferment of imagination and language generating an array of new voices in Welsh poetry in English.” 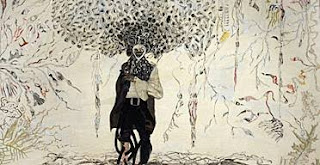 “Ghostly Presences and the Histories they Unfold: Utopia and Dystopia in the African Atlantic Vistas of Ellen Gallagher’s Bird in Hand”

Abstract: The African Atlantic visual artist Ellen Gallagher has created in her signature canvas Bird in Hand (2006) perhaps the most stunning visual depiction of the black Atlantic to be created since Paul Gilroy’s seminal text. This paper will discuss the way the painting interprets multiple chronologies and geographies as it exhibits historical wounded memory whilst seeking redemption in a futuristic Aquatopia made possible by the imaginative leap of Drexciya. This idea, developed musically in Detroit techno, that the dead babies of pregnant women thrown overboard during the middle passage lived to form new mutant sea creatures that survived to build a new civilization enables Gallagher the imaginative scope to create her visual new world order. The paper explicates the way that whilst talking of this futuristic Utopia, she does not lose sight of the middle passage realities that created it or of the commodification of black bodies that has accompanied diasporan Africans since the ending of the slave trade. Using the works (amongst others) of Edouard Glissant, Marcus Rediker, Ian Baucom, Kobena Mercer and Avery Gordon, this paper explores and explicates the wonders of Gallagher’s Utopian vision created in response to the Dystopian realities of slavery and racism.

The first of the New Stories from the Mabinogion series is reviewed on the CREW Reviews website.

"In the first line of the introduction to Seren’s 'New Stories from the Mabinogion', Penny Thomas legitimately suggests that “some stories, it seems, just keep on going.” Although the series editor then goes on to painfully romanticise such stories as being “a whistle in the reeds, a bird’s song in your ear”, the opening eight words of this introduction are enough to suggest why Seren have commissioned this series. There is evidently a market for the modern retelling of ancient myths, as Canongate’s recent sequence has shown, .... " Read more
Posted by Kirsti Bohata at 16:08 No comments: