2012 mark 50 years since the publication of Raymond Williams’s seminal volume The Long Revolution (republished this year by Parthian Press). On Friday November 2nd, The Burton Centre / CREW, Swansea University, will host a conference at the Dylan Thomas Centre entitled ‘Long Revolutions in Wales and Japan’. The conference is free to Swansea University students and staff and £10 for everyone else. Tickets available from the Dylan Thomas Centre. The event is part of the Dylan Thomas Festival 2013.
http://www.dylanthomas.com/index.cfm?articleid=8653

Long Revolutions in Wales and JapanRaymond Williams in Transit 3

9.30 – 10.00
Opening remarks and thoughts on The Long Revolution.
Daniel Williams

10.00 – 11.00
Fuhito Endo, ‘A Reading of Freud through Williams: an Actual/Affectual Residual and the Long Revolution’
(Chaired by Shintaro Kono)

3.45 - 4.45.
Ryota Nishi, 'Writing the Vanishing Mentality of Underground Labourer: Kazue Morisaki and the Structure of Feeling of the Memoirs’
(Chaired by M. Wynn Thomas)

Fuhito Endo, Professor, Seikei University Tokyo
Professor Endo is currently staying at the Centre for the History of Psychological Disciplines at University College London as a Visiting Professor.  He is now working on the historical/theoretical significance of British female psychoanalysts between the wars.

Yasuhiro Kondo, Lecturer in English, Toyo University
His research interests are in twentieth-century literature and culture in Britain. He wrote an article on the relation between strike and culture.

Takashi Onuki, Associate Professor, Kwansei Gakuin University, Japan
His field of interests is the genealogical approach to culture and society in twentieth-century Britain. He is a co-editor of Cultural History: Affections and Struggles in Britain, 1951-2010 and the works he co-translated include Tony Bennett ‘s New Keyword and Edward Said’s Reflections on Exile.

Dai Smith is the Raymond Williams Chair in Cultural History within CREW which he joined in March 2005. He is also Chair of the Arts Council of Wales. Professor in the History of Wales at Cardiff University 1985 to 1992 and Editor BBC Radio Wales and Head of Programmes (English language) at BBC Wales from 1992 to 2001 when he was appointed Pro-Vice-Chancellor at he University of Glamorgan. He is now Series Editor of the Welsh Assembly Government’s Library of Wales for classic works written in English from or about Wales.

Kieron Smith is a PhD student within CREW at Swansea University. His research is focussing on the films of John Ormond within the context of national broadcasting.

The event is arranged by Daniel Williams, Director of the Richard Burton Centre, Swansea University 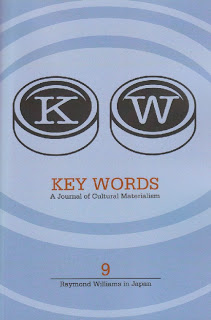 The Long Revolution in Wales and Japan’ is the third ‘Raymond Williams in Transit’ sessions, and the third collaboration between Welsh and Japanese academics. The first took place on October 16th, 2009, at a one day conference entitled ‘Raymond Williams in Transit: Wales – Japan’, arranged by CREW (The Centre of Research into the English Literature and Language of Wales) at Swansea University, and supported by the JSPS/MEXT Grant-in-Aid for Scientific Research. September 25th, 2010, saw a follow-up event held at Japan Women’s University, Mejiro Campus entitled ‘Fiction as Criticism / Criticism as a Whole Way of Life’.  The conference on September 25th was preceded by a symposium on the 23rd on ‘Raymond Williams in the 1950s’. These events in Japan were hosted by the Raymond Williams Kenkyukai (The Society for Raymond Williams Studies in Japan), with the support of the Faculty of Humanities at Japan Women’s University, and the JSPS/MEXT Grant-in-Aid for Scientific Research. As well as reports on the CREW website, below, Tony Pinkey has written a report on the events in Tokyo on the Raymond Williams society website: http://www.raymondwilliams.co.uk

These events have resulted in two significant publications:
A special issue of Keywords: A Journal of Cultural Materialism 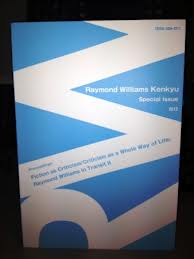 Posted by Daniel Williams at 00:32